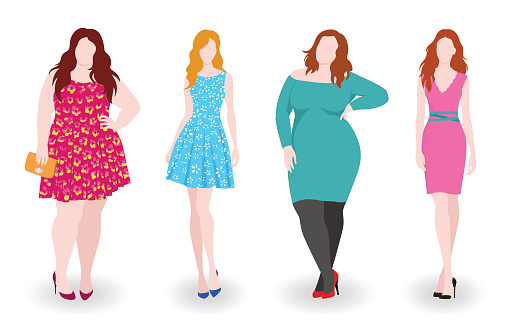 People on the chubbier side and modelling seem to be contradictory terms.

Traditionally clothes were designed slim fit. Modelling was for the sleek and the trim. This was quite disheartening for obese people.

Not anymore, with brands dedicated to Plus sized people entering the market and size zero turning to be a bad word, it’s party time for plus-sized models.

Plus-size model is term applied to an individual of average to larger stature. Designers have recognized & created the fashion line which is smart, glamorous and customizable for the plus sized.

Ethically-made pieces have raised their hopes. Films like ‘Dum lagake haisha ‘have proven that obese people can be fashionable.

Marathi films like Vajandaar showed the lead actresses to be overweight.The film has inspired many people of the same stature to experiment. Films have given a break to plus-sized models like’ Bodyguard’.

Recently films like ‘Sultan’ and ‘Dangal’ have featured plus-sized models. These films are based on the lives of wrestlers. Plus sized models have shed their inhibitions after watching them.

Models like Ashley Graham have been an inspiration in the plus size model world.

Dishamber Das is also an inspiring. These models have proven that it’s their attitude that counts. Glam magazines like Vogue have given plus-sized models good Instagrams.

Documentaries have been made with plus sized models..thus proving that there’s room for all in the house.

U.S. television program America’s Next Top Model has featured contestants acknowledging the plus-size industry’s relevance to fashion since the show’s launch in 2003.Plus Model Magazine, an online publication was launched for plus-sized models.

Thankfully what Yves Saint Laurent did for style or Irving Penn for imagery is incredible for the self-esteem of plus-sized models.